One of the first projects undertaken by the Committee of the Trust was the rebuilding of a derelict cottage close to the northern shores of the loch and to the islands. This is now a small museum and interpretive centre, opened by one of the Trustees, Mr Bruno Schroder, on 22nd August 1989. The late Pipe Major Donald MacArthur, a descendant of the MacArthurs of Proaig, hereditary pipers to the Lordship, played The Pibroch of Dunyveg’ at the ceremony.

In January 1990 a meeting took place in the cottage which was of great significance, as it led to the excavations on the site which began in June of that year, led by Dr David Caldwell of the National Museums of Scotland. Trustees, representatives from the Museums, from Historic Scotland, from Islay Estates, who own the site, from the Clan Donald Centre in Skye, and other experts on the history and background of Finlaggan, came together to discuss the future of the site, Very little has been written about Finlaggan and so only excavation can fill the gaps in our knowledge of what life was like in this interesting place in the past. Among the few written accounts are those of Dean Monro who, in 1549, found it “well biggit in palace work according to their auld fassoun”, and of Martin Martin, who in 1695 found the place in ruins. 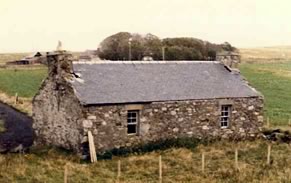 A highlight of recent years was the visit of a group of sailors from the galley ‘Aileach’ which was built in 1991 in Moville in Ireland, the first galley to have been constructed for hundreds of years. She left County Mayo in Western Ireland in May 1991 and her route took her to Islay on her way north to Stornoway. The ship called in at Lagavulin in the shadow of Dunivaig Castle, and at Port Askaig, Among the crew who visited Finlaggan on that occasion were two descendants of the Lords of the Isles, the Hon Hector MacDonnell of the Glens of Antrim and Andrew MacDonald of Boisdale, son of Ranald MacDonald, 24th Captain of Clanranald.

In June 1993 the 500th anniversary of the Forfeiture of the Lordship was commemorated when ‘Aileach’, crewed mainly by a group of members of Clan Donald USA, made a return visit to Islay during a voyage from Skye to the Clyde. A simple ceremony depicted the inauguration of a Lord, while the 17th century description of the ceremony (which can be found on page 2) was read aloud, along with a 15th century address to the Lord in Gaelic. Music on the pipes followed the ceremony, and feasting naturally played its part. Included in the meal was cheese made from a recipe handed down from the ladies of Clan Donald.

The Finlaggan Visitor Centre is now closed for the season, reopening for Easter 2023. The historic site, however, remains open all year round. "Thank you to everyone who visited us during this year. Your support is very much appreciated..

Please see our social media pages for updates on the progress of the new bridge.

When visiting the historic site, dogs are to be kept on a leash at all times. We only welcome guide dogs inside the Visitor Centre.